Donald Trump may not have many fans among Hammersmith & Fulham’s residents but he’s got one among the local Tories if Cllr Robert Largan’s peddling of an “alternative fact” to his constituents is anything to go by.

In an email to bemused Sands End residents, Largan has made the remarkable claim: ‘Labour’s attitude to Sands End was recently revealed in a report…outrageously describing the area as “a region of poverty and squalor”.’

Shocking stuff. But perhaps not quite the way Cllr Largan intended.

The phrase “a region of poverty and squalor” is actually from a 2004 Character Profile of Studdridge Street by council officers – a profile that was itself referring to the area in the early 1900s:

"Sandilands Road, built in the 1880s was one of the next developments, but because it was made up of simply designed terraced artisan cottages with no front gardens and tiny back yards, it soon became thought of as part of a 'region of poverty and squalor'". (LB Hammersmith & Fulham Conservation Area No.7 - Studdridge Street Character Profile, para 4.2.)

Of course, Cllr Largan knows his claim is nonsense.
Just as he knows all that Labour councillors are doing for Sands End residents.

Labour's first action when it won in 2014 was to overturn the Conservatives’ decision to close Sulivan Primary School.

It’s building a new Sands End Community Centre to replace the one the Conservatives sold off and  help compensate local people for the unwanted supersewer agreed by Tory MP Greg Hands and his mate Boris Johnson.


And Labour is building 33 genuinely affordable homes in Sands End (see 17.2 in this planning document) – something the previous Conservative administration wouldn’t do.

Sadly, what Cllr Largan forgot to tell residents is that he and his Conservative colleagues actually voted against the 33 new Sands End homes (again, see 17.2 here).

Donald would be proud. 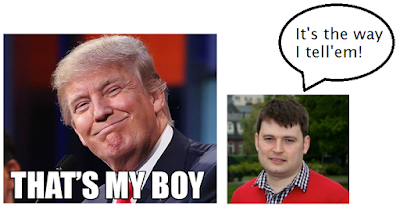 Posted by HFConwatch at 3:14 pm

Stop these right-wing ideologues from spoiling our borough

HFConwatch
H&F Tories are among the most right-wing in the country. Thank goodness Labour is now running the council. Join the Labour Party at www.labour.org.uk